Tomoya tries to convince Akio to talk to him about his decision to marry Nagisa. Akio, however, will only talk to him if he can get a decent hit with a baseball match. Tomoya continues to practice hitting the ball until he gets good enough to face Akio again. He finally hits a home run, and runs over to Akio to beg him to let Nagisa be with him; Akio agrees. Christmas time arrives, and as Nagisa turns twenty, she has her first drink of sake; when she is drunk, she accuses Tomoya of being attracted to Sanae. Nagisa’s fever goes up again, causing her to become absent from school, but not enough to repeat another year. Tomoya soon organizes with some of their friends and previous classmates to gather at the school and celebrate Nagisa’s graduation. Nagisa receives her diploma and graduates. Tomoya and Nagisa get married soon after. 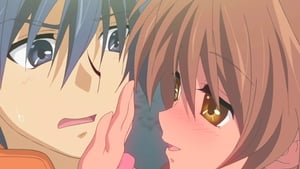