Tomoya and Ushio get back from their trip together. After spending a night with Nagisa’s parents, they leave to Tomoya’s apartment, where they will both be living from now on. Some time later, Tomoya takes a day off from work and the two meet up with Kouko, whose sister Fuko has been released from the hospital. Afterward, Tomoya and Ushio visit Tomoya’s father. Tomoya manages to convince his father into moving back to the countryside with his mother. While Tomoya and Ushio say goodbye to Tomoya’s father, a light appears and gets absorbed by Tomoya, while only being noticed by Ushio. 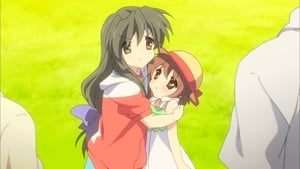