When Tomoya brings Ushio to school he meets her teacher, who is none other than Kyou Fujibayashi and they have a conversation. After that, Tomoya goes to work and Yoshino asks him for Fuko to play with Ushio, since she likes her. Tomoya agrees to this and Fuko arrives at his house to play until the evening when she goes back home. When it is time to sleep, Tomoya uses Nagisa’s song to lull Ushio to sleep. The next day, Kyou tells Tomoya about sports day at school where the parents are to participate as well. He is reluctant about it, but Ushio encourages him, which makes him change his mind. One evening, Ushio is taking a stroll to the new hospital by herself and encounters Fuko on her way. When the latter asks why she does this, Ushio says it is for no real reason. The next day, Tomoya is preparing for the meet at the Furukawa bakery with Sanae and Akio, when Ushio is suddenly struck with a fever, much to the others’ shock. 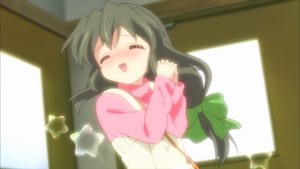