The End of the World

Ushio’s fever does not back down and Tomoya decides to stay home to take care of her. In case he had to leave home, he calls for both Akio and Sanae to take his place. Ushio tells Tomoya that she wants to go on a trip again like last time, but he declines and tells her that it will happen once she gets better. After resigning from his work, Akio offers him some money, but Tomoya declines his kindness and Akio states that every man has something to protect. After several months, winter arrives, and Ushio’s fever still does not back down, and Tomoya seems to be getting sick too. Ushio once again ask Tomoya to go on a trip, and he ultimately accepts thinking that he might not be able to fulfill another promised wish. After they leave the house, Ushio’s fever worsens, and she dies in his arms right after telling her father that she loves him. Soon after, Tomoya collapses as well. 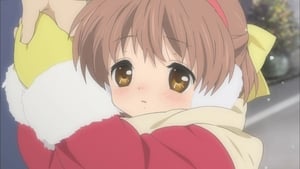