The girl in the Illusionary World is dying in the snow, and the robot regrets having her take the journey. The girl can finally hear the robot, and tells him that they once existed in another world. As she hums the tune of “Dango Daikazoku”, the Illusionary World starts to collapse. As the robot is swept away, the girl calls him “Papa” and disappears with the world. Back at the hill, Tomoya calls after Nagisa, and she is glad that he did so. Nagisa brings Tomoya through time, and together the voices of the robot and Tomoya note the end of his long journey. Tomoya awakens to Ushio’s birth, but this time, Nagisa miraculously survives. After Nagisa watches Tomoya give Ushio her first bath, she and Tomoya see that countless orbs of light are floating throughout the city outside the window. They both sing to Ushio and from then on, Tomoya and Nagisa experience a happy life raising their daughter together, finally free of their cursed fate. 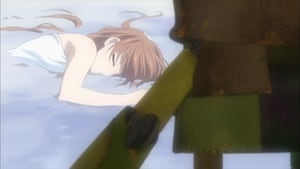