As everyone gathers their strength for the final blow, Natsu is consumed by Zero’s “Genesis Zero” attack. As he floats in the world of nothing, Igneel’s voice speaks to him and he breaks free, defeating Zero and manages to destroy Nirvana’s legs along with his allies, resulting in Nirvana’s destruction. 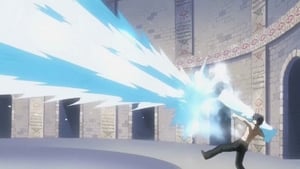