Acnologia arrives at the island and begins to destroy it. Seeing the Black Dragon of Apocalypse, Makarov tells his guild members to run while he fights it, but the fairies wouldn’t leave without their master and decide to fight alongside him. However, their efforts ended up being futile as Acnologia releases his Dragon’s Roar, seemingly destroying the island and everyone on it. 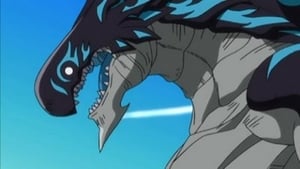