Makarov is defeated and gravely wounded in his battle against Hades, which is sensed by the wandering Laxus. Meanwhile, the other members of Fairy Tail battle Grimoire Heart’s army. Joining the battle are the Seven Kin of Purgatory, each of whom possess an ancient form of magic called Lost Magic. Natsu faces off against Zancrow, one of the Seven Kin and a “God Slayer” who can create black flames Natsu is unable to eat. 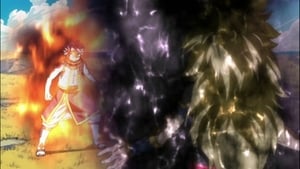