Natsu is overwhelmed by Zancrow’s God Slayer magic, which proves superior to his own Dragon Slayer magic. Upon finding Makarov badly injured during his fight, Natsu regains his resolve and defeats Zancrow by nullifying his own magical power, allowing him to eat Zancrow’s flames and combine their power with his own. Meanwhile, Lucy, Cana, Gray, and Loke fight Caprico, another member of the Seven Kin, while Mirajane and Lisanna fight Azuma. 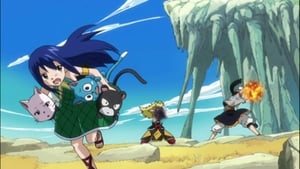