As several wizards across Crocus are cornered and killed by the dragons, Ultear recalls her forbidden Last Ages spell, which is capable of reversing time at the cost of the user’s life. After deciding to atone for for her lifelong misdeeds, she casts the spell in an attempt to avoid the dragons’ arrival in the present. Afterward, she discovers that only one minute has been reversed and collapses. As a result of her spell, however, the wizards are able to foresee and prevent their own deaths, including Gray’s. Lucy reunites with her friends at Eclipse and reveals that, according to her future self’s notebook, they can return Future Rogue and the dragons to their respective time periods by destroying Eclipse once and for all. 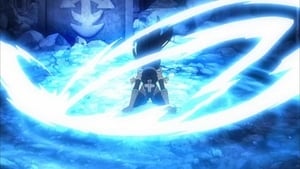