The king is holding a ball at the palace to honor the wizards of Fiore for their valor during the Grand Magic Games and their great efforts to protect the kingdom from Future Rogue and the seven dragons. Everyone is having a good time except for the nagging feeling that something is wrong when Natsu doesn’t show up. Later, Princess Hisui is forced to take responsibility for her part in the peril that beset the kingdom. 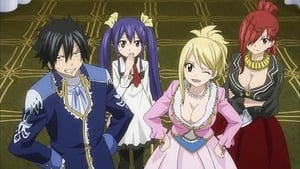