.hack//Legend Of The Twilight: 1x3

Shugo begins to level up after the incident in the previous episodes’ event but opens a trapped box causing his level to fall back down to level one. He then meets Hotaru who is taking care of a Grunty. However the grunty falls ill and it is up to Shugo and Hotaru to find a phoenix feather to cure it. While adventuring, Shugo meets Sanjuro Sunaarashi for the first time.The end of the episode sees Balmung asking Sanjuro to train Shugo. 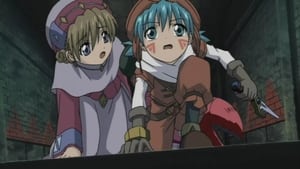