The group of pirates known as the Anten Seven have suddenly express a concern after a number of their men have been killed, the perpetrator being none other then Gene Starwind. Seeing him as a threat they send one of their top assassins to deal with him. On Heiphong, the group is taking a short rest and talking financial trouble (as usual) when somebody calls Gene out. A man in a short trenchcoat whos call himself Shimi challenges Gene to a duel and proves his skill by getting the drop on Gene first before he can pull his gun out. Impressed, Gene accepts. Later while out for a drink he meets a man named Leilong and the two talk for a a bit where Leilong reveals a bit of his past though only vaguely before leaving. The next day Gene duels Shimi at his location and wins only to find out he was a decoy. The real Shimi or “”Leilong”” appears and takes him on, easily beating him. Jim, Aisha, and Suzaka try to save Gene but only result in getting killed! Seeing Gene too wounded to fight fully, 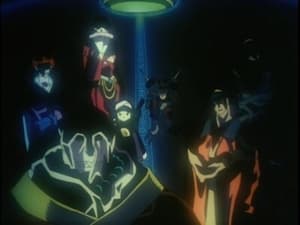