Taking place where the first ep left off, Gene and Jim try to figure out who the young girl (Melfina) in the suitcase is as well as try and get some answers out of Hilda when Mel goes through resesitation (some form of waking a android). Their talk is cut short by the arrival of the pirates. Jim and Hilda go for the spaceship while Gene holds off the pirates, Mel finally wakes up and all four of them get away into outer space. While in space we find out about Gene’s phobia of space travel and a bit about his past (his father was killed by pirates). The group reaches Blue Heaven (a asteroid that doesn’t allow guns) where they meet Hilda’s friends and get Mel some real clothes. Gene and Hilda also run into a bit of trouble with some ruffians at a bar, who also try to attack them both again while their sleeping. As Gene and Hilda go out into the hall from their room, a robot blocks their path. Too humans against one robot with no guns, not looking too good for our heroes right now. End. 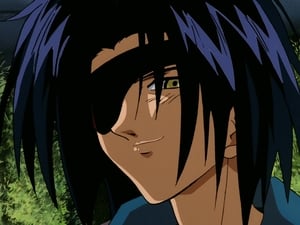