Cats and Girls and Spaceships

On they’re way to the Leyline. The Outlaw Star run into another pirate ship which almost defeats them due to the fact that the pirate’s grappler’s arms detact and attack them separately making it three against one. The group narrowly escapes and stops a nearby station to fix the damages. While resting there Jim runs into a girl dancing in the park, the two notice each other and hit it off well. The girl introduces herself as Hamnio and her two cats Kemy and Mata. After some talking the two decide to meet again the next day. During that time Jim tries to get some advice from Gene but only gets made fun of (cruel Gene, shame on you). Jim and Hamnio meet again and once again things go well, the two plan to meet once more. However as we see Hamnio run off to her ship. We find that its the one that attacked the OS at the beginning, Hamnio part of the Anten (of course if you read ep. 15 you already knew that ;)). Back with the rest of the crew, the repairs to the ship are fixed and their rea 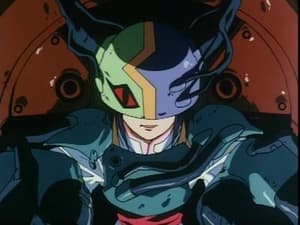