Grave of the Dragon

The OS crew reach a planet where the origin of the Leyline is suppose to lay. After landing and finding the temple they begin to investigate. Right behind them are the MacDoguls, pretty sore after their last defeat and still seeking revenge. While the groups resting separately Gene admits to Suzuka that he doesn’t know if he can keep the promise he made to Mel awhile back though the assian convinces him otherwise. Outside Mel sings her them song which attracts Harry to her. Once again he asks her, in a more non violent fashion, to join him but Mel declines remembering the promise Gene made her. Gene shows up between their meeting and both MacDoguls attack the OS crew (Harry/Gene and Ron/everybody else). Gene able to defeat Harry before a earthquake stops everything and causes the crew to make a hasty departure but not before Gene asks Mel if she still wants to come with them, to which she says yes. A little later, the crew stop in a station to regroup when Gwen Khan messages them. He 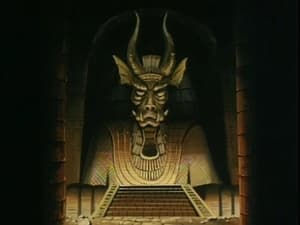