The crew stop at Planet Tenrei, a place famous for it hot springs resorts. While Jim, Mel, Aishi, and Suzuka relax, Gene goes hunting for two wizards for some casters for his gun. He eventually finds them but must do a favor by getting them (dirty) pictures of a woman named Urt who rivals them in business. After falling for a couple of traps, Gene reaches the mountain that houses the wizard woman. Urt gives him a caster and a video to bring back to the two other wizards. Successful on his mission, the wizards fork over three more caster shells though they warn Gene that the casters can take the shooters life force when used. Then the three watch the video of Urt naked though they don’t realize that it actually a bomb (the timer in the corner of the screen) until it blows up in their faces though the wizards seem satisfied. With the object of the quest obtained the OS continue to the Leyline though the three wizards wonder if Gene will bring disaster to the universe. 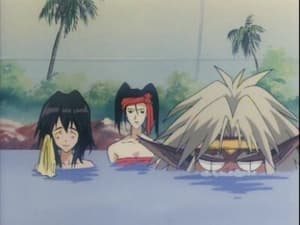