And it all comes to this: The Outlaw Star has finally reached the Galactic Leyline however their not the first ones there. The Antens are already at the site guarding it fiercely. Some skillful piloting on Gene’s part, weapons from Jim, and help from the Ctral Ctral empire ship (Aisha gave her folks the location, traitor.) allow the group to reach the entrance followed closely by the still revenge seeking MacDoguls (with Gwen Khan) and pretty soon the Antens. After getting through a high pitch sound trap, fighting off the Antens, and finding a pathway thanks to Melfina. The OS crew reaches the heart of the Leyline. The group then has to get out and hoof it for awhile before reaching a dead end. Their about to turn back when a bright light covers then transports them to another section of the Leyline. And unfortunately right in between their worst enemies. Before anything can get messy, a voice calls out to Mel asking why she has returned then transports her somewhere. The voice tells 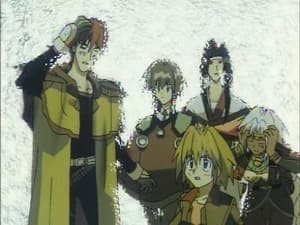