When the Hot Ice Melts

After landing on the asteroid, our group moves inside to find a docking port and the object of their journey: The XGP! Inside the ship, the group meets the computer Gillum 2 and are registered as the ship’s crew. They prepare to launch only to be attacked by the pirates once again. Hilda goes out to hold them off while Gene prepares the ship. A fight outside and inside the asteroid ensures only to be made more hectic when a unexpected attack by the MacDougalls, double crossing the pirates and settling a score with Hilda, pushes the asteroid as well as all the ships into then sun. Gene and co. get the XGP going and break their way out of the asteroid. One of the pirates try to attack it only to be destroy by the XGP’s grappler arms. Hilda, still in her own ship, makes her way over to the XGP but the remaining pirates knock her away with a anchor and latch on to the XGP! With no choice, Hilda leaves Horus behind and use the anchor’s wire to reach the XGP. Unfortunately, the girl pirate a 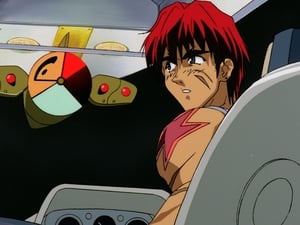