The Beast Girl Ready to Pounce!

Gene and crew return to Blue Heaven and break the bad news to Swanzo and Mikey (Hilda’s Friends from the second ep). After a bit of talking, Swanzo agrees to paint the Outlaw Star and give it a registration number for free as a payback to Hilda while Gene, Jim and Mel spend the day on the asteroid, but not before being warned that a Ctarl Ctarl was looking for them. After a short talk in their hotel room, the group go out to eat when their suddenly confronted by a cloaked figure asking about Hilda. It turns out to be none other then (surprise surprise) Aisha! She pesters them about Hilda and info on the Leyline, when Gene tells her he doesn’t know anything, she attacks. A short chase ensures into an alley where Aisha tries to use her beast power with the help of the moon, only to pointed out by Jim that Blue Heaven doesn’t have a moon. The group splits up (Gene with Mel of course) and are somehow able to escape her. Gene and Melfina take a break at park where Gene space phobia kicks in 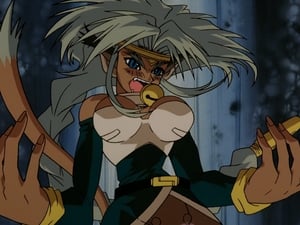