The group returns to Sentinal 3 where they visit Fred Lou, Gene’s friend and weapons seller. While Gene looking for guns a cloaked woman enter Lou’s office and takes out the guards soon revealing herself to be Twilight Suzuka, a famous and deadly assassin. Gene intervenes when she tries to kill Fred, but once he and his crew leave Lou’s office. Suzuka confronts them outside. A chase ensure leading up to a duel outside the city. Gene able to subdue Suzuka by pulling off her shash which holds her kimono up and makes a deal with her on her pride: If she wants Lou she has to kill Gene first. Suzuka agrees and Gene leaves after giving back her shash and Bukuto (a wooden sword) which he also grabbed. Lou grateful for the rescue and give Gene a discount as a reward. Meanwhile, Suzuka vows to Gene that it isn’t over. End 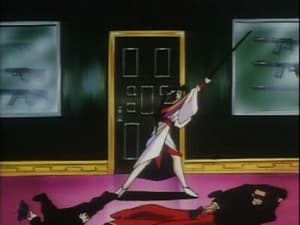