Picking up from the last episode, Gene been poisoned and the OS crew (plus Suzuka) are trying find a way to help him. Matters aren’t helped when the pirates call and try to negotiate the XGP for the antidote. Finally Mel takes a chance by using her navigation chamber to heal Gene. At the same time the pirates attack and try to take the ship by force. They almost get through but Gene is cured in time to take them out with a little help from Suzuka. Afterward he decides it’s time to leave Sentinal 3 once and for all. Against the commands of the the control tower, the group blast off right then and there. They are successful in reaching space but once again find leftover pirates to fight. In a amazing battle using the grappling arms and teamwork, our heroes receive there first victory as well as a new crew member in Twilight Suzuka. With that the group heads to their next destination, Heiphong. End 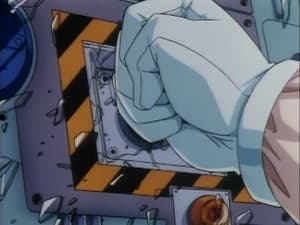